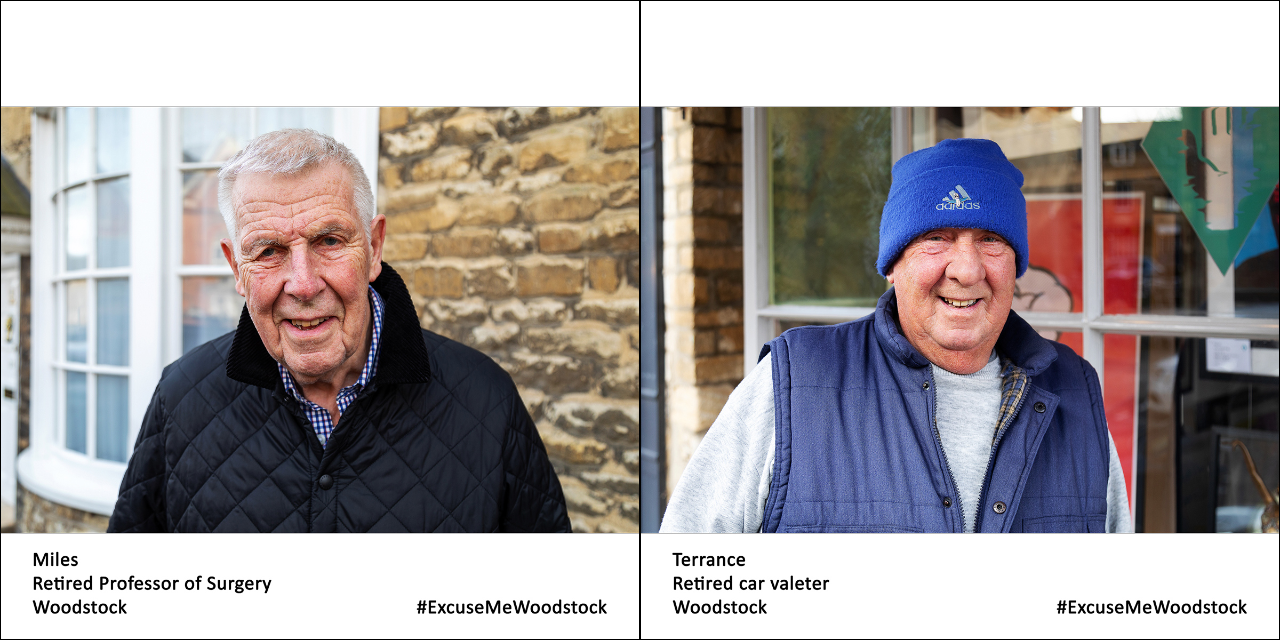 Have you ever stopped a stranger in the street and asked to take their photograph? Ian Taylor has, hundreds of times. Ian’s photographs are available to view online in a digital street photography exhibition, #TheExcuseMeProject, hosted by The North Wall Arts Centre, from 2 – 20 February.

#TheExcuseMeProject, so named because the first thing Ian says to the people he meets is “Excuse Me”, started in 2019 when Ian’s interest in street photography combined with a fascination about the fleeting interactions that we all have with strangers throughout our lives. Ian generated these interactions on the streets of Oxford, Burford, Woodstock and Chipping Norton simply by stopping people on the street, talking to them about the purpose of the project and memorialising that meeting with a photograph. Along with the picture, Ian also asked a few questions about the person. Hence, the finished image has a unique extra level of interest for the viewer that sets it apart from other street photography portraits.

Ian says: “I've often thought about the fleeting interactions we have with other people. It could be a quick comment about something you're both doing or maybe a delivery driver dropping off a parcel or maybe just a conversation with a stranger as you're waiting for a bus. I wonder if they remember it – maybe, maybe not – will it impact their lives – maybe, maybe not – will they even register that it's a noteworthy event – maybe, maybe not. But maybe it will. Maybe, just maybe that interaction will have more impact than you might think. Maybe it'll change a stranger’s point of view, brighten their day, or maybe you're the only person they'll talk to that day.”

“There’s no real posing or direction just a pure, honest, simple portrait. These people weren't expecting to be photographed today. There's an honesty in the way they look. No special preparation for a photo, just a normal day, just a normal person, just a slightly unusual request from a stranger – can I take your photograph?”

Ian managed to continue shooting pictures for the project throughout lockdown, whilst still abiding by social distancing rules, by taking pictures in his village. Ian wanted the lockdown pictures to be slightly different from the main body of work so apart from the usual “what’s your name? Where are you from?” and “what do you do for a living?” questions he added “how long have you lived where you live?” and “what’s something that you’ve done that’s amazing, unusual or that you’re proud of?” This generated some very unexpected answers but also gave the project much more of a community feel. “The resulting photos became a great record of my community in a really positive way that was unrelated to Covid,” says Ian.

The North Wall in Summertown was originally due to host an exhibition of Ian’s project pictures. Still, new lockdown restrictions have meant that it will now be exhibited virtually through The North Wall website, going live on the 2nd of February 2021, for 3 weeks. There is also a podcast on the website where you can hear Ian talking about his work and this particular project. All of #TheExcuseMeProject pictures can be found on Instagram @theexcusemeproject.

Would you like to be part of #TheExcuseMeProject? On Saturday 6 February from 10 am-12 pm, Ian will be offering 10-minute slots over Zoom to anyone over 18 who would like their photograph to be featured in the exhibition. Just like his interactions with people in the street, Ian will take your photo and ask your name, what you do and where you live. Your photo will then be added to the project gallery. Please email lairdn@thenorthwall.com to reserve your place.

Ian says, “I will continue shooting pictures in the way indefinitely as it’s such a unique way to provide any community with a unique record of its people and their lives. Sometimes we should all talk to a stranger – you never quite know what you might find out!”