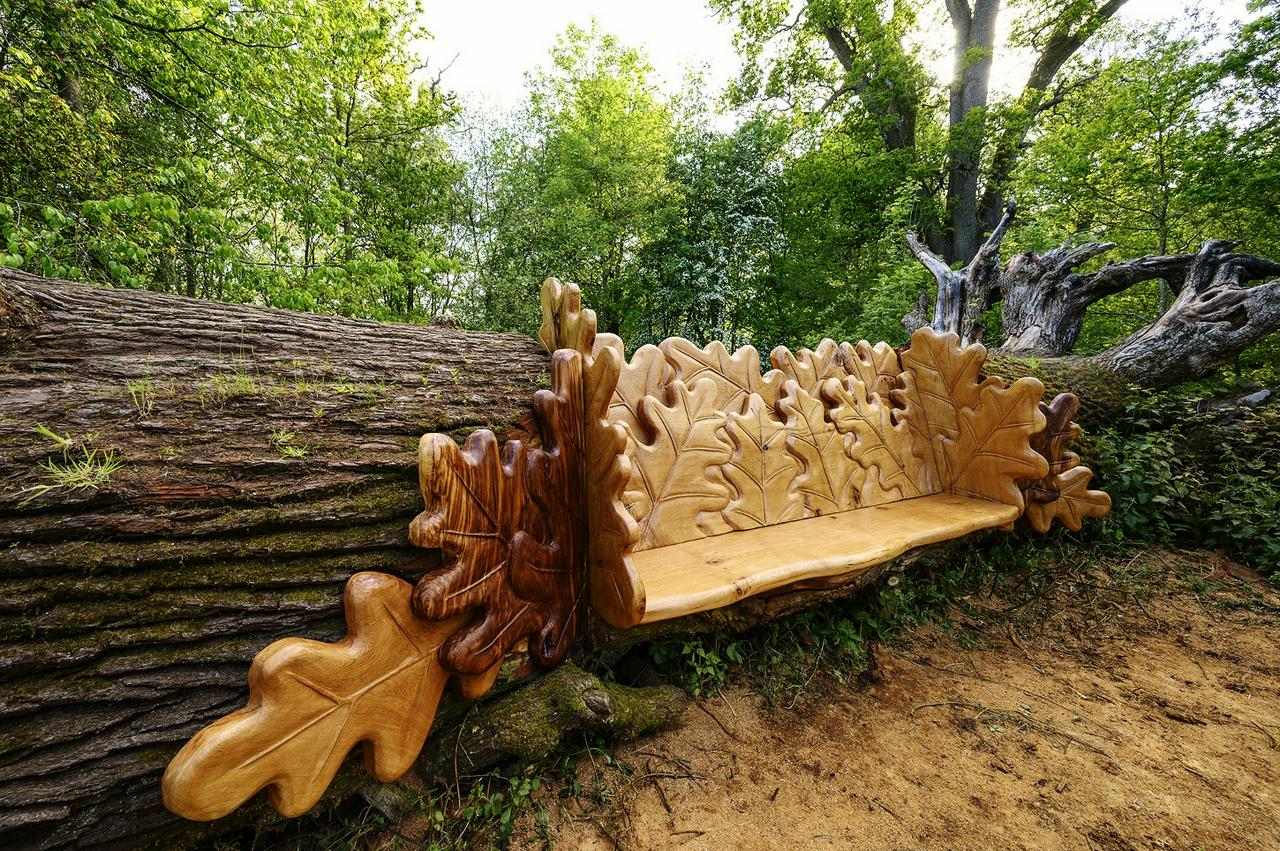 An ancient fallen oak tree has been given a new lease of life as a stunning carved bench at Blenheim thanks to the artistic skills of chainsaw artist Matthew Crabb.

The 500-year-old oak came down beside a footpath in the Oxfordshire UNESCO World Heritage Site’s High Park during the recent strong winds and was found to have root rot.

The forestry team decided to leave it in place as fallen trees contribute significantly to the biodiversity of the area, and provide a perfect habitat for a range of insects and small mammals.

As it was located so close to a footpath they commissioned Matthew to transform it into a bench that visitors can use to rest, relax and get their woodland wellness fix.

The design for the bench features giant oak leaves in keeping with its surroundings while the majority of the fallen tree has been left untouched to encourage wildlife.

“Each of our ancient oaks has an extraordinary tale to tell and we wanted to celebrate this particular tree’s legacy by transforming it into a place where visitors to High Park can sit and contemplate the world,” said Blenheim’s Head Forester Nick Baimbridge.

“Matthew’s skills really are incredible and he has created a truly stunning work of art that looks amazing and really fits into its wider woodland setting,” he added.

Based in Somerset, Matthew Crabb works mainly on large scale wood sculptures. The Blenheim bench took about 50 hours for him to complete.

“Every wooden sculpture that I create is part of a progression that inspires the next. I want to be impressed by the finished result as much as my clients are,” said Matthew.

“Each work of art is inspired by the particular properties and characteristics of the wood I am working with – therefore no two pieces are ever the same,” he added.

Matt started the Matthew Crabb Sculpture Studio in 2006. In 2012 he won both the Sandringham Cup and the English Open Chainsaw Carving Championship.

In 2015 he was commissioned to create a large wooden skeleton for English multimedia street artist D*Face , which was exhibited in Spain.

Blenheim estate is home to the largest collection of ancient oaks in Europe with some trees believed to date back over 1,000 years.

High Park was originally created by Henry I as a deer park in the 12th century. Around 90% of the woodland is made up of oak trees and it is thought that at least 60 of these oaks date back to the middle ages.

The area has been recognised as one of the most biodiverse habitats in the UK. More than 60 different birds including goshawks, peregrine falcons, spotted flycatchers and redstarts have been recorded along with 19 mammals like stoats, field voles, fallow deer, badgers and nine different bat species.

The site is also home to at least 243 different beetles; including 25 types of dung beetle.

Over 600 species of moth and more than 20 butterfly species have also been identified, along with 35 arachnids and 161 different ants, wasps and bees.

In addition to the varied fauna, High Park also supports 275 types of plants and flowers and so far, a total of 334 fungi have been recorded.